Want to improve company culture? Proactive and positive Temps can bring sunshine to your workplace. 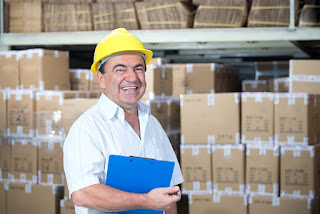 An improvement in workplace morale was an unexpected benefit of hiring a temp for one lucky company. Here’s how – and why – its CEO’s choice paid off.

If we were to ask you what benefits you’d expect from a decision to take on a temporary worker, chances are you’d have no trouble coming up with a few. You might expect the move to improve workplace productivity. Perhaps streamline your workflow. Free up your senior staff to perform. Get rid of some of the tedious behind-the-scenes tasks weighing you all down.
But when it comes to the question of culture, the image of the apathetic temp, reluctant to get involved, always at arm’s distance, seems to pervade industry dialogue.
But what if we told you that a great temp could actually improve company culture?

We recently placed a temp on assignment, who we’ll call ‘George.’

At first glance, there was nothing remarkable about George. With picker/packer experience under his belt, he’d come to Temp Market hoping to be taken on as a warehouse temp worker. His skills, experience and bio landed him a two-week assignment reasonably quickly, so off he went. Nothing unusual so far.

But it was during his time on assignment that George’s true value became apparent.
On day one, he walked into a warehouse full of full-time staff. As full-timers with somewhat limited options for career progression, they were disillusioned. Uninspired. Apathetic.

But George the warehouse temp worker managed to turn it all around. By the end of his placement, his co-workers had bonded. He’d given them something in common - him. He’d subtly modelled a string of positive behaviours that his co-workers had begun to emulate. By his final day, their transformation was complete – and he was able to walk away leaving his previous employer gobsmacked, in the best possible way.

So, what did George do that made him so valuable?

1.      He made an effort to get to know everybody.
George didn’t give his co-workers a chance to even consider whether he would follow in the tradition of the much-maligned ‘apathetic temp’ or not. He was proactive. He introduced himself to everybody. And given that according to a 2006 Princeton Psychology study it takes just one tenth of a second to form an impression of somebody, getting in quick was definitely in George’s best interest.

2.      He hit the ground running.
Temps have a huge opportunity to make their co-workers happy, because they’re taking a whole lot of work off their colleagues’ hands. But you can set your temp workers up for a win by being smart about the type of tasks you assign to them.  As outlined in our Temp Pyramid [below], assigning your temps roles in areas that require little training or institutional knowledge – like admin, customer service, and warehousing – means they can fire on all cylinders from day one and vastly improve workplace productivity. 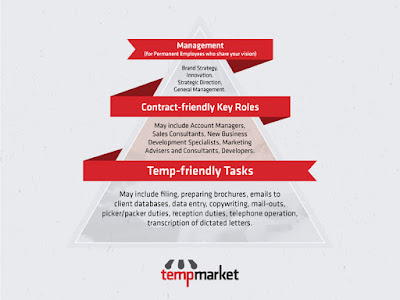 3.      He had a positive attitude.
Positive attitudes are important - and contagious, says Sigal Barsade, a Wharton University Management Professor whose 2007 paper showed a strong correlation between positive thinking and employee performance.

Barsade discovered this to be true to the extent that in a study of long-term care facilities, in places where employees reported a positive workplace culture, the residents reported less pain, felt greater satisfaction, and made fewer trips to the emergency room.

George’s attitude was a crucial component to his company’s success. Of course, it’s unrealistic to expect one person alone to drive culture. But if emotions, as Barsade would have it, “…travel from person to person like a virus,” it makes sense to pick somebody who’ll be modelling the kind you want to replicate.

Choosing a temporary worker isn’t necessarily easy, but it can be simple. Ensuring that you find a temp with a proactive personality and a positive attitude, to whom you can quickly assign tasks that require little training, will set you up for success. After all, the placement may be temporary, but the benefits can be long-term.

Temp Market is a matching platform for temporary and contract workers which provides a 360-degree look at your potential new recruit, including skills tests, ratings from other employers and a bio. For more information, visit our website: www.tempmarket.co.nz.

5 ways small business can benefit from hiring a casual worker There comes a time in every business owner’s life when you are just swamped....

Temp Market is the smart way to connect with temporary or short term workers and work.